The trailer had its first outing at our Picture Book Picnic party last week and received great feedback. We hope it gives you a flavour of all the amazing titles included in the Picture Book Picnic and there’s also a nod to some of our best loved classics including Maisy, We’re Going on a Bear Hunt and The Pencil.

You can watch this trailer, and many other great videos, on our You Tube channel.

The Walker canteen was transformed into an indoor British summer fete for last Thursday’s Picture Book Picnic Party. Guests were welcomed into a room full of bunting and gingham table clothes for a totally original summer party to celebrate the Picture Book Picnic campaign and the fantastic host of illustrators on our list. Jugs of Pimms were served and guests snacked on picnic style canapés followed by a visit to the ice cream stall for strawberries and cream and ice cream cones to round off the evenings. Illustrators Bruce Ingman, Chris Haughton, Ollie Lett, Viviane Schwarz, Sue Heap, Alexis Deacon and David Lucas congregated on the (fake) lawn for some live doodling on flipcharts, adding too and developing each other’s drawings - a fascinating and unique opportunity to see such a wonderful group of illustrators working together.


Walker Books Picture Book Publisher Deirdre McDermott gave a lively and heartfelt speech in which she invited us to celebrate the wonderful picture books Walker is home to. The guests were also treated to an exclusive screening of the wonderful Picture Book Picnic trailer which features animated characters from the campaign titles. The trailer was met with squeals of delight and rapturous applause – it will soon be featured here so watch this space!


It was a jolly and buzzing evening and guests were in high spirits after the Pimms and were delighted to receive picnic goody bags on departure, which contained branded postcards, posters, stickers and activity sheets. We have a goody bag to give away to one lucky person, for your chance to win just tell us which Picture Book Picnic title is your favourite and why. The winner will be announced at the end of July.
Posted by Picture Book Party at 12:36 2 comments:

What Do TOYS Think of Us?

David Lucas, author of Lost in the Toy Museum and the soon to be published Christmas in the Toy Museum, has very kindly agreed to do a guest blog about the inspiration behind his two titles and tries to answer the question -What do toys think of us? We hope you enjoy it!


My two new books are set in a Toy Museum - a real place: the Museum of Childhood in Bethnal Green in London, which is close to where I grew up, and very near where I still live.

The Museum of Childhood has always been part of my life - I used to go there when I was at school, when I was at Art College, and when I was starting out as an illustrator. (For a while I even worked part-time in the Museum shop.)

All the toys in my stories are part of the Museum collection, and most of them can be seen on display - although some live in the stores downstairs. (It was a real treat, when I was working on the book, to be able to poke around behind the scenes.) 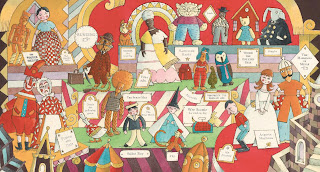 They're all old toys, of course - some are centuries old - and they are all a bit knocked about, and worse for wear, bearing the scars not so much of neglect as of having been loved too much. And some look so sad - like Pumpie, the elephant, or Pip the monkey, or Winkie the One-eyed bear. 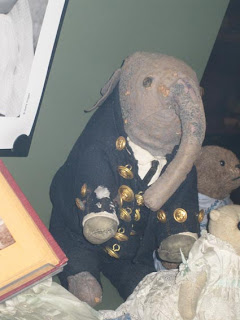 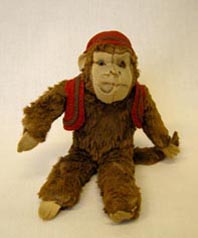 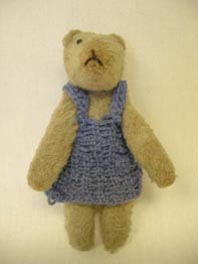 Others are more mysterious - like Woolworth the woollen owl or Handsome Harry, a strange knitted cat from the fifties. 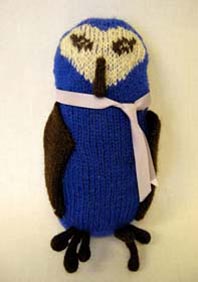 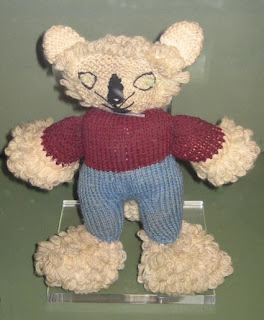 I've always felt that what is most moving for any adult visitor to the Museum is that sense of nostalgia for their own childhood, that memory of innocence, when there was nothing more precious in the world than a knitted owl or a cloth-eared old elephant with a wonky trunk.

Children believe that toys are alive, that they really are thinking and feeling and dreaming. We're expected to grow out of such nonsense, of course, but I do not necessarily think that adults are wiser or cleverer for ceasing to have such an imaginative connection with the things they love.

It was common in every other era of history (when people were every bit as clever as we are today) to believe that everything was alive - even the things we like to call 'inanimate' objects. In Japan the old animist folk-beliefs still persist, even in such an advanced society, so that little everyday objects like pan scrubs are made with faces, not just for decoration, but as a reminder that the pan scrub has a spirit, that the pan scrub has feelings too - and that it deserves respect. 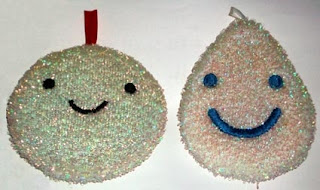 The trouble is that these two characters just hang on little hooks in my kitchen watching me - I daren't actually ever use them for washing up...

Anyway, it is good to see that in the twenty-first century science is at last catching up with the instinctive beliefs of children - and with the ideas of the old folk religions.

Despite all the advances in the study of the brain, scientists remain utterly baffled by the problem of consciousness. How is that the stuff in our heads - which, when you look at it, is just as ordinary as any other kind of stuff - how is it that it can think and feel and dream? No one knows. Honestly. No one has a clue. It is called the 'hard problem' of consciousness, and it gets harder the more you think about it.

No one, at the moment, no matter how clever they are, is even close to an answer. It is such a problem that even some of the most tough-minded, materialist thinkers have begun to take seriously the old idea of 'panpsychism' - that all matter is thinking and feeling stuff - that the basic stuff of the world is thought itself - that atoms and molecules are in fact more like patterns of thought. Which is what children and poets and people of 'primitive' cultures have always believed - that all things are alive, that all things have a spirit or a soul, that all things think and feel and dream. Even if they might not think in quite the way that we do - and after all, why should our kind of thinking be the only kind?

There might be all sorts of minds - from specks of dust to stars - all thinking different sorts of thoughts, dreaming different sorts of dreams. I love the idea that all of us - people, animals, trees, tables, chairs, books, toys, the sun and the moon - that we are all brothers and sisters together in the here and now, all alive with some sort of spirit. To me, it makes the world a magical place - a world alive with magic. My real hope is that I've captured some of that feeling of magic in my books.
Posted by Picture Book Party at 13:09 1 comment: