You're a Hero - picture book competition! 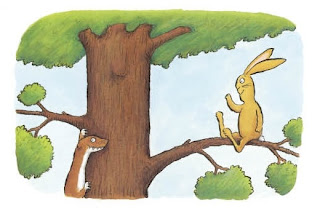 This week, to celebrate Jon Blake and Axel Scheffler's picture book You're a Hero, Daley B!', we're giving away a fun-filled Picture Book Picnic goody bag full of tasty treats for your little ones to get stuck into!

The bag includes postcards, strickers, a Daley B activity sheet, a poster, a cookie-cutter and a copy of the gorgeous picture book, 'You're a Hero, Daley B!'. To enter, simply fill in your email address below and you could be our lucky winner!

Your details will not be shared with third parties and will only be used for the purpose of this competition. Open to residents of UK and ROI only. Please click here to view our full terms and conditions.


Closing date 31/04/2012. Open to residents of UK and ROI only. Subject to full Prize Draw Terms and Conditions
Posted by Picture Book Party at 14:59 No comments:

The making of a hero

This month, writer Jon Blake reveals how he came up with ideas for his hilarious book You're a Hero, Daley B!, inadvertently kicking off the career of the 'unknown, young illustrator', Axel Scheffler... 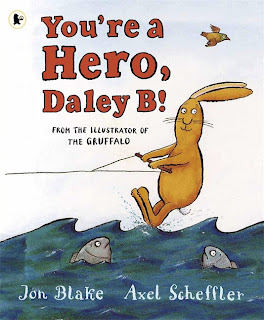 I was a writer of challenging young adult fiction when my editor at Walker, the late great Wendy Boase, asked me to have a go at writing a picture book.  I happened to have a doodle of a man in a helicopter hat with three rabbits on leads.   I wrote a story based on this.  It didn't work, so we cut two of the rabbits and the man in the hat.  That was the beginning of “Daley B”.

Wendy had given me a few picture books to look at.  One of them had stupid questions in it, such as “Did the dog sit on the ball?  Did the ball sit on the dog?”  That gave me the idea for the questions asked by Daley B.  I can't remember how the story evolved, but once I'd created a character as innocent and confused as Daley B, it was probably obvious I had to put him in a situation of grave danger.   But it was only after Walker had accepted the text that we decided what should happen when Jazzy D leapt at Daley B.  I then rewrote the story to make Daley B's big feet a central interest.

I'm sure the joke at the end occurred to me only after I'd written the line “You're a hero, Daley B!”   As I never tire of telling my creative writing students, you can never plan all that takes place in a story: things happen spontaneously in the act of writing which lead to the final vision of what the story should be – even in a picture book.

The first illustrator lined up for “Daley B” couldn't do the book.  Wendy and Jim the art editor then proposed an unknown young illustrator who they thought might do a good job.  His name was Axel Scheffler.   Axel's illustrations, with all their wit and innocence, turned out to be the perfect match for the story.

“Daley B”, or “You're a Hero Daley B” as it became in the paperback version, is my most successful book, and though I still like to be known for my more grown-up fiction, such as “The Last Free Cat”, I am extremely proud of it.   It's very much me – I like to think no-one else could have possibly written it.  It's also a memorial to Wendy, who was such a great mentor to me, and whose sharp editorial eye was so vital to its success.

Have a go at this fun activity sheet!

You're a Hero, Daley B! by Jon Blake and Axel Scheffler is available to buy here.

Posted by Picture Book Party at 16:32 No comments:

A walk with Salvatore Rubbino...

Salvatore Rubbino takes us for a walk through the making of his new book, A Walk in London, in an exclusive guest blog post for Picture Book Picnic...

A Walk in London charts a real route through the city with the possibility that a family might walk this together, should they feel like an adventure, or as a read to be enjoyed at home as a virtual tour of London. The reader follows a mother and a daughter and their experience of landmarks, monuments and life at street level.

As a Londoner I felt incredibly excited about making a book about my city but the challenge was to see London with fresh eyes. Drawing on location has always underpinned my work and helped me to understand things so I began exploring the city by drawing what I saw.


Londoners can sometimes take their city for granted, in fact I had never witnessed the Changing of the Guard at Buckingham Palace until I started research for the book. When I joined hundreds of visitors for the spectacle of precision marching and brass bands, it was so thrilling I wondered in the end why I had waited so long; the queen even made an appearance. It was this experience that helped to form the ‘spot the royal family’ game I play with the reader through the book.

Collecting visual research was very enjoyable and I auditioned many places around London for a role in the book. Here are a few from my sketchbooks:
Trafalgar Square: 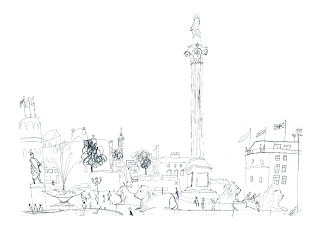 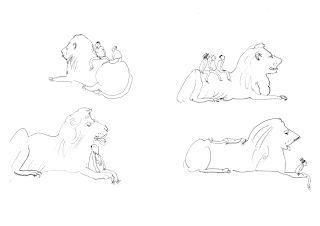 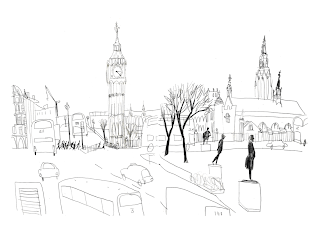 The ‘Gherkin’ in the City of London: 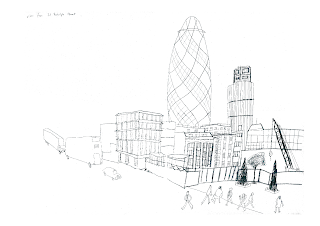 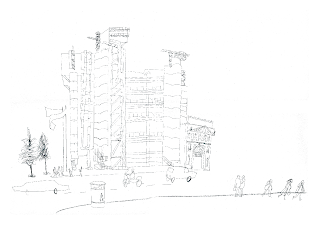 I could have happily carried on exploring and drawing but eventually decisions had to be made; decisions about what to include, what to say about London and how to organize everything into a coherent whole. 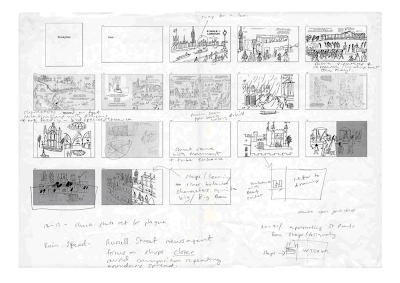 This sheet of small quick drawings records conversations between me and my publisher at an early stage of the book making process. Different ideas and a sense of structure is slowing taking place but there are still lots of gaps!

I wanted to show the things that excite me about living in London, the way that very old and very new buildings stand alongside each other, the way that traditions are still followed, the oasis offered by parks teeming with wildlife even in the centre of London and how it always seems to rain at the most inconvenient times. In fact London is full of wonderful contrasts if you look for them. The initial pictures for each page can vary a great deal from the final coloured artwork. Characters, themes and ideas evolve and it might take several attempts before I find the right solution. Here's an initial idea and the first page as it appears in the book. The characters are in the foreground on the right and have just arrived by bus. 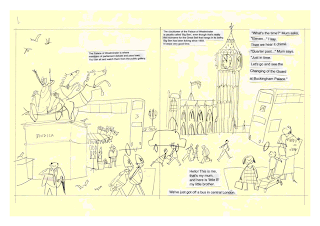 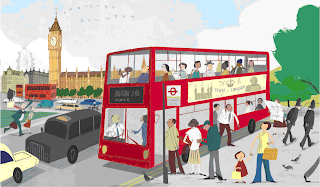 An early version of St James’ Park together with the final artwork: 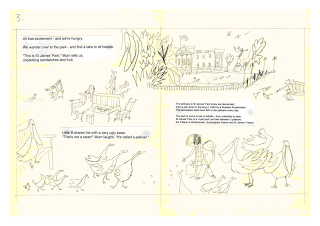 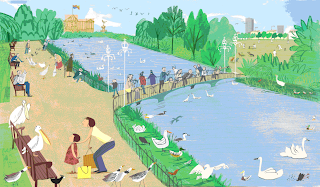 Rain descends on London and Londoners: 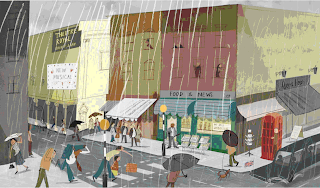 St Paul’s Cathedral and the interior: 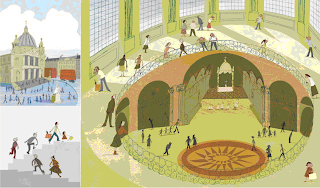 I try to leave room for my imagination to play. Pictures can look very different between initial drawings and the final artwork. If I can continue to discover things and remain excited then hopefully some of that enthusiasm will come across and who knows, may even encourage the reader to go for a walk in London.

Can you find your way through the maze of London?


Have a go at this fun activity sheet!

A Walk in London by Salvatore Rubbino is available to buy here.
Posted by Picture Book Party at 18:39 No comments: