A Walker welcome to baby George! 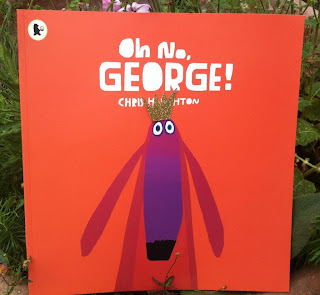 We couldn’t be happier that Kate and William have named their baby George! Here at Walker, George is a very popular name among our picture book characters – our favourite being naughty George the chocolate cake-loving dog from Chris Haughton’s Oh No, George!  Join in the celebrations and download these free Oh No, George! activity sheets,  perfect for all your little prince and princesses out there.

To celebrate, we’re running a competition on Twitter to win a gorgeous Oh No George! book and poster – just retweet and follow @BIGPicturebooks by 5pm today for your chance to win!

Posted by Picture Book Party at 11:37 No comments: 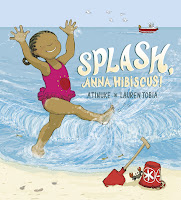 This month we went behind the scenes with illustrator Lauren Tobia to find out all about the making of Lauren and Atinuke's latest picture book, Splash, Anna Hibiscus!
What do you enjoy most about being an illustrator?
I suppose it is the moment when a new text arrives as just the words. It's then I have my first go at scribbling ideas all over the page. I get to look at it, explore it and see what it does.  I feel it’s a massive privilege to get to play with an authors words and their world. Oh and the fact I get to go to work in my slippers!
In Splash, Anna Hibiscus! , Anna and her family go to the beach, is there anywhere that you would like Anna Hibiscus and her family to go to next?

Anna’s world is so rich and fun I think she can go wherever Atinuke wants to take her, but I will say I love to draw big crazy imagined city’s full of tall buildings markets and people and gardens.. 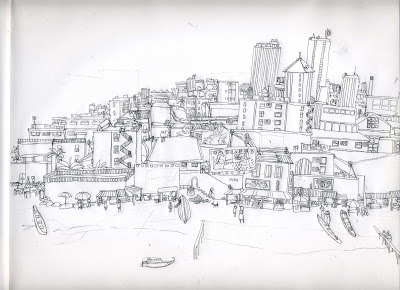 Anna Hibiscus lives in Africa with her family, have you ever been to Africa?

I think Anna’s world is a bright sunny amazing world of Atunuke’s and now my imagination and that’s a place I visit all the time. Real Africa is such a huge continent with so many different people and cultures in it that I would probably never see it all in a lifetime. I have been to the very top of Africa on my holidays once but as for Anna’s world of West Africa no, but I would love to one day.

How do you go about creating your characters?

Atinuke's stories create such a full world that I just read the text, had a cup of tea with a pencil in my hand and she came to me so quickly it was like she just waved at me out of the paper! Mind you she has evolved a bit over the years and in Splash she even gets to wear a sunny swimsuit.
Where do you get your inspiration for your illustrations?

I get most of my inspiration from looking.. it's filling your visual world with new things.  The way plants cast shadows on walls, children in the park, views out of windows the writing on a cereal packet, films, traveling, the internet. I got a lot of ideas for Anna’s city from watching Nigerian pop videos.  I also have a big collection of picture books that I have always loved looking at. There are so many illustrators working now who I admire its very difficult to just say one or two. I think we are in a golden age of beautiful books. I would like to say that some of my favourite illustrators are still ones from my childhood such as Edward Ardizone, Jennie Corbett and the fabulous Gerald Rose. 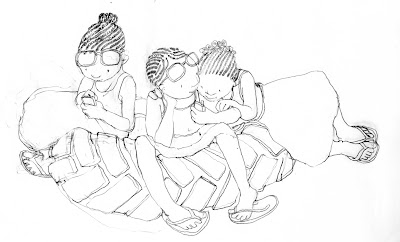 What was your favourite picture book growing up?
I had so many to choose from my mum took me to the big city library every week and so I always had different books to look at, the wonderful thing about libraries is that you get a pile of new books every week! I suppose it had to be anything Illustrated by Gerald Rose..but in particular  “The Great Jelly of London” I would get that book out week after week.
If you weren’t an illustrator, what would you be?
I expect I would still be an intensive care nurse or if not I would have continued working for a lovely landscape gardener. We had lots of fun whizzing round country lanes in a white van drinking tea out of flasks and I love being scruffy.
How long does it usually take you to make each illustration for the picture book?
That’s a very difficult question as I work in so many stages...It starts with a rough drawing that maybe only takes a few hours but it gradually evolves over time and its maybe months before the drawings become colored and tweaked into finished artwork. I work with advice from Atinuke and a very talented team at Walker Books that help nurture the book on its way.
Do you have any tips for aspiring illustrators?
Yes.. Draw and look! I would also say that the most wonderful thing you can do is go to university and study illustration with an open mind, experiment and enjoy it, learn as much as you can ...then leave and do your own thing! 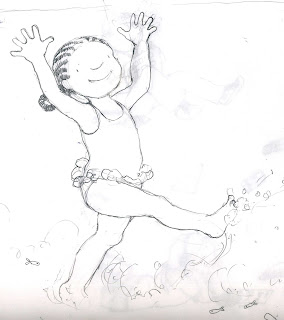 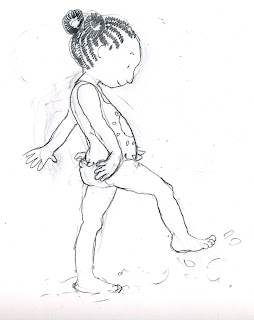 Get your hands on a copy of Splash, Anna Hibiscus! by Atinuke and Lauren Tobia at your local bookshop 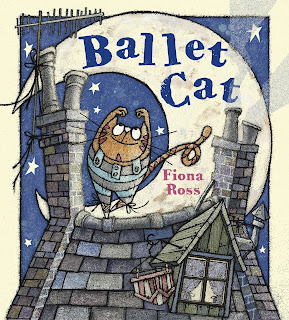 No alley cat can ever be a ballet cat...at least, that's what the Crazy Cat Crew think. But when Arthur finds a pair of ballet shoes, he twirls and whirls his friends right off their feet...

Author-illustrator Fiona Ross tells us about story behind the book in this exclusive blog post about the making of Ballet Cat.

Much of the inspiration for Ballet Cat comes from my childhood - I grew up watching old musicals like An American in Paris, West Side Story and Singing in the Rain, so a world in which anyone could loose themselves in music and dance really appealed. Arthur (the ballet cat) unexpectedly finds a pair of ballet shoes, tries them on and starts to dance. Even though he’s ridiculed by his friends Arthur is determined to keep on his dancing. He loves it you see! He shows the other cats how to break the mould and through Arthur’s love of ballet the others learn about acceptance, saying sorry and the importance of friendship. They also learn a new dance step or two! 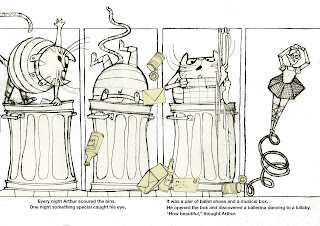 I wanted to have a mixture of five characters that would make up the Crazy Cat Crew. I used the endpapers as a tool to introduce the reader to each of the cats, thinking this would make Arthur (the outsider) an equal part of the gang and give all the characters equal importance. I wanted each cat to have it’s own personality and potential backstory. 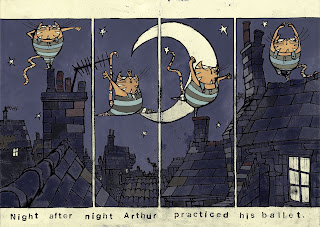 I really like to focus on composition in my illustrations, leading the readers eyes into or 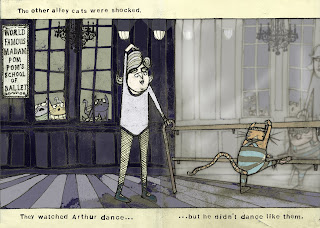 right across the page. I also enjoy experimenting with type, exploring different ways in which a book can be read, challenging the traditional layout. There are some characters who don’t make it into the final book, and one of them is Madam PomPom Arthur’s ballet tutor. She is based on my mum who used to teach a keep fit class when I was growing up. It’s fun to base your characters on people you know or perhaps someone you simply spot on the the bus. People watching has become an integral part of my research!

My favourite part of making Ballet Cat was the development stage, finding the right
story to tell alongside drawing numerous ideas. At this early phase I always start to
place text even though it’s not been finalised. This helps me see the book as a final object and look at how both type and image work together. 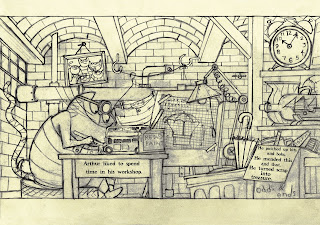 From early on I wanted to define the different spaces and environment within the book. I felt the alley cats could be ‘living it up’ down the alley ways and street corners, whilst Arthur’s adventures would take place on the nighttime rooftops amongst the stars. 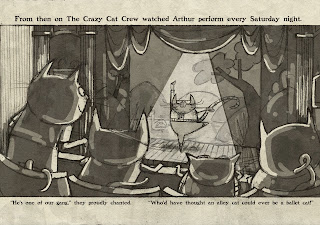 The alley represents routine and reality and the night sky is the stuff full of dreams. Arthur shows the gang how these two elements can come together, allowing the best of both worlds. The final illustrations are a combination of line drawing, painting and digital textures.

I love experimenting with different media as it’s important to keep on developing. I like to see my illustrations and stories adapting and growing into something new and
unexpected. I’m excited for what comes next.

Get hold of a copy of Ballet Cat by Fiona Ross at your local bookshop
Posted by Picture Book Party at 13:31 3 comments: 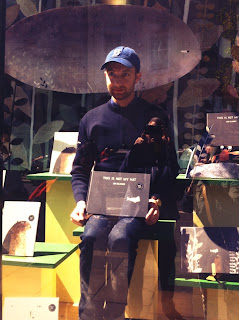 Jon Klassen!
What a DUDE. It was so much fun to be with Jon at the start of his tour in Ireland and the UK and it was also the first time we’d ever hear him speak at an event. Being a double-Caldecott winner and having one of your books currently sitting on New York Times Children’s Picture Book Best Sellers list for its 32nd week has certainly not gone to Jon’s hat-clad head. In fact, his generosity of spirit, his excellent sense of humour and the way he spoke so smartly about books made him a huge hit wherever he went! 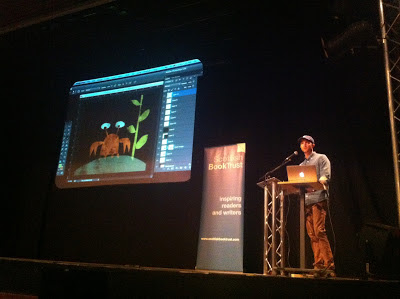 On top of his fantastic CBI talk (to a teeming auditorium of Hat books enthusiasts!) I was very lucky to see Jon’s event with the Scottish Book Trust in Glasgow – his first big event for children on his UK tour. A not unsubstantial 400 children, aged 4-5 Years old, packed into the beautiful Mitchell Theatre, all geared and ready to hear a very laidback Jon Klassen (“400 kids? Pffft.”) speak about his books. During this event, Jon did a projected live drawing on his laptop – which is the first time he’s ever done that – and the kids went wild. They were completely entranced and utterly charming in themselves. When Jon asked them if they were afraid of the dark, they uttered a very firm, Glaswegian “NOOOO!” They were tough kids. He spent at least an hour and half signing books afterward and taking special requests for drawings. 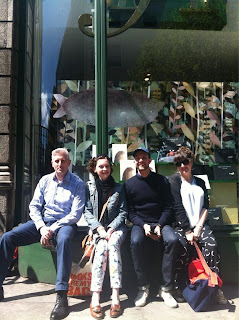 I Want My Hat Back
This is a perennial favourite for everyone in the office. What we learnt from Jon’s awesome CBI talk was that he imagines the characters in this book as actors … who think they’re too good for this movie. So they’re reading their lines “No, I have not seen any hats around here.” in very deadpan voices, they’re TOTALLY unamused and they want to get to the end of the story already. It changes the way you think about the book and it’s pretty funny, too.

Beef jerkey, to keep energy levels up.
Mc Donald’s (and we’re not ashamed either).

Well, that’s a whole other story!
Posted by Picture Book Party at 11:45 No comments: