The story behind the shadow 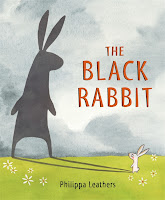 Shadows are magical things; they follow you around everywhere, they come in all kinds of shapes and sizes, and when you're just a small rabbit they can be pretty scary! Philippa Leathers tells us about the inspiration for her gorgeous new picture book The Black Rabbit...

The main character in my picture book The Black Rabbit originated from an animation I made years ago at college. A small white rabbit only had a small supporting role, but I liked him so much I wanted to use him in a story of his own. The way he was drawn with short, stumpy little legs meant he moved in a certain way. I loved the way he ran, his short legs meaning he comically wiggled from side to side and had to put in a lot of effort. 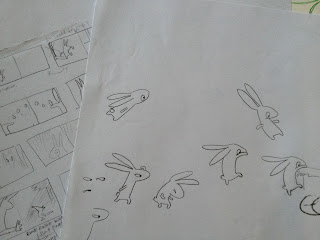 It can be such a long process to get the story right and sometimes I will go back again and again revisiting ideas. Ideas are all around us, but it can be hard to recognise them and after a long time spent looking for the plot idea for The Black Rabbit, one day it just popped into my head. I have my own two little house rabbits who are always together, following each other around. They are easily spooked and can jump at the smallest noises or movements. I had been drawing Rabbit running in different situations when the saying -scared of your own shadow popped up. I then wondered what would happen if there was real danger? 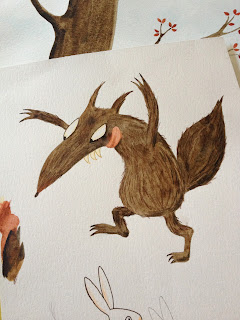 I find it easier to write and illustrate the book together and try to balance the words and pictures. If the pictures show something, this does not need to be repeated in the text, which I like to keep very minimal. There needs to be a good interaction between the two. If the story can be told in a better way with a picture then the text can be as minimal as possible.

Illustrating The Black Rabbit was a bit of a challenge at times as my baby daughter was only a few months old and I had to pick up my paintbrush whenever she napped. The illustrations are drawn with pencil and then painted mainly with watercolour but I use ink and coloured pencils too- anything I think will work best and then I tweak the final illustration a little digitally.

The story The Black Rabbit is about a rabbit who is afraid of his own shadow, seeing it as a large frightening creature who follows his every move.  Rabbit tries to escape this large black rabbit and eventually in the deep, dark wood, manages to do so, only to encounter something more dangerous…. I hope you like it.

Join in the fun and download your Black Rabbit activity sheet here.
Find The Black Rabbit at your local bookshop here.
Posted by Picture Book Party at 17:49 No comments: 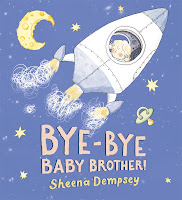 This month, we're very excited about Bye-Bye Baby Brother!, a gorgeous new picture book all about new babies, busy mums and a little girl with a very BIG imagination! In the exclusive guest blog post for Picture Book Party, author-illustrator Sheena Dempsey tells us all about how she came up with the ideas for her debut picture book...

Bye-ByeBaby Brother! began as a quick MA project that took only a few weeks to put together, but it was a long journey before it became the final version that it is now. It all started with the idea of a bored little girl at home trying to get her busy mother’s attention and going to all sorts of lengths to do so. 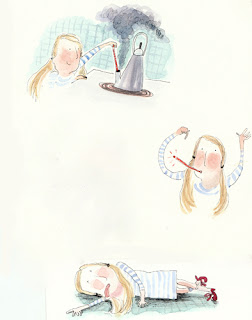 The baby character was introduced early on, without intentionally choosing a universal theme, I thought, how absolutely annoying must it be to have a usurper baby come along when you are three years old? Although I’m the youngest in our family, it’s easy to imagine the frustration.

My initial draft had some slightly sinister humour and I think that was what attracted me to this idea at first, the scope for mischief. How many ways could Ruby rid the family of her baby brother and have her mother all to herself?

There were several pictures trying out different ideas in this first draft, feeding him to Rory (Ruby’s dog), throwing him away with the rubbish, hiding him in the coal bunker, flushing him down the loo and putting him into the washing machine.

The trouble with this line of thinking is that it’s too risky to depict these things happening in a picture book as some disturbed children may try to imitate the evil deeds in real life and then there would be all kinds of horrible lawsuits and the world as we know it would end. So I had to come up with less dangerous ways for Ruby to get rid of Oliver that couldn’t actually be re-enacted in real life. I drew and re-drew several different scenarios, some were vetoed for still being too dark (e.g. hiding Oliver up the chimney) until we settled on the four that are in the book. The style of drawing changed and became softer to suit the content and the overall result is a much younger book and a gentler story with more emotional depth, hopefully at not too much of a cost to the humour.

On my Masters course, it was drilled into us by one of our course tutors that doing proper roughs is paramount. His refrain for the year was: “Work everything out in the rough first, the angle, the composition, all the details before you do the finished drawing”. However, this vital piece of information just fell out of my head and for some reason that remains a mystery to me, I didn’t really do proper roughs for Bye-Bye Baby Brother! I did very loose, rough ones which didn’t really cut the mustard when it became time to make the final artwork. I was jumping from thumbnail type drawings to final artwork and I made things very difficult for myself, especially as I was so new to illustration. So that was one nugget that I learned about myself and can pass on – if you hand-draw everything, very detailed and finished-looking roughs to work from for final artwork are extremely useful. It’s all a learning curve.

To make my final artwork, I use a lightbox (well, it’s a glass desk and an Ikea lamp which works even better) to trace over my (now-very-detailed) rough drawings. I draw very lightly in pencil on hot-pressed paper and then go over it with pigment liner pens and then rub out the pencil. Then I paint everything in with Schmincke and Lukas watercolours.
I work from home in my flat in southeast London.

We're welcoming in the new season with a new name for our picture book blog - Picture Book Party! Join in the fun and discover the best new Walker picture books, go behind the scenes with the authors and illustrators, get activity sheets and win prizes. Stay tuned over the coming weeks for guest blog posts from author-illustrators Sheena Dempsey, Philippa Leathers and Chris Haughton, plus new fun-filled activity sheets and much, much more!

To subscribe to the Picture Book Party quarterly newsletter simply click here and we'll keep you up to date with all the latest picture books. Everyone who subscribes before 30 April will be entered into a competition to win a set of Walker's latest picture books, including Sam Who Went to Sea by Phyllis Root and Axel Scheffler, Bye-Bye Baby Brother! by Sheena Dempsey, The Black Rabbit by Philippa Leathers, Oh No, George! by Chris Haughton, plus a gorgeous Oh No, George! limited edition print.  Good luck!

To be eligible to win, please join our newsletter here.

By subscribing to our newsletter, you are agreeing to our terms and conditions. Your details will not be shared with third parties. You may unsubscribe at any time.