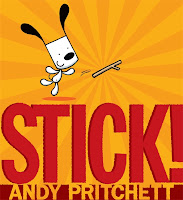 Stick!, the debut picture book by Andy Pritchett, has only one word in it - stick! Hilarious, energetic and beautifully simple, Stick! is all about an adorable little puppy, one stick, and his quest for a friend. Today we go behind the scenes with author-illustrator Andy Pritchett, who tells us how the book came about...

Where did you get the idea?
I guess the idea for Stick! came out of the fact that I’m much better at eating cake than talking to people. There’s a saying ‘Write about what you know’ so when I was thinking of creating a picture book, an image popped into my head of animals having trouble connecting with other types of animals. For example, cows could talk to each other about grass until they came home, but what would they have to say to a dog or vice versa? The first image here shows that initial idea scribbled on a bit of scrap paper (I always forget to carry a sketchbook with me) 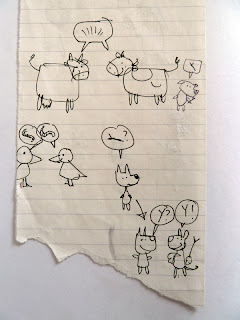 There aren’t many words are there?
No, in fact originally there weren’t any words at all. The ancient Egyptians didn’t need letters to make words and tell stories, they used pictograms (called hieroglyphics) and who am I to argue with thousands of years of ancient civilisation?

The sales department of Walker Books had different ideas though, so after a lot of too-ing and fro-ing it was agreed that the book would have some words, but one pictogram stayed in, can you spot it?

Were there any other changes to the story?
Looking back through all the scribbles I made when creating Stick! there aren’t many changes from the first version I showed to Walker. The ones that have been made were crucial though. You can thank Lucy and Maria, my editors, and Ben, the art director, for that, I’d never have thought of them! The most important was the main little dog character. You can see the differences in the second image here, when you compare the first spread of the story I showed to Walker and the same spread when I did the rough for the final book. 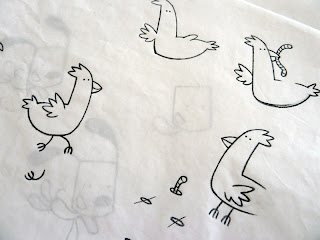 How do you create the images?
I worked out the book plan by hand in pencil. I then scanned this in, had a think about it and then moved bits around on the computer in a program called Photoshop. This is also when I thought about the colours throughout the book. I printed various bits out, put them on the wall and then had more of a think about the story or if the images were right. Stick-on-notes on these print outs come in handy when trying out different words or poses. 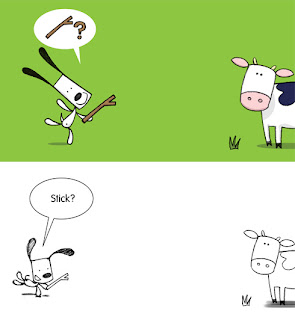 All the line work is drawn by hand. I traced the final images onto layout paper with a black pencil to get a nice crumbly line and then scanned them into the computer. Everything else is created in Photoshop and then Ben added the words and made a lovely cover.

When it comes to picture books I’m a big fan of Ed Vere, Mo Willems and Dick Bruna amongst others. I think that’s quite obvious when you look at Stick!


Do you have a dog?
I’ve never owned a dog, (or cow, pig or chicken!) but I have a cat. She likes chasing sticks, leaves, string and me when I have a glass of milk.

Walker Dogs and their sticks!
Here at Walker Books we LOVE dogs (and cats and cows and pigs and chickens for that matter, but especially dogs), so much so that we often bring our dogs into work with us. So to celebrate Andy's new book, we couldn't resist sharing some photos of our furry friends with their favourite sticks! 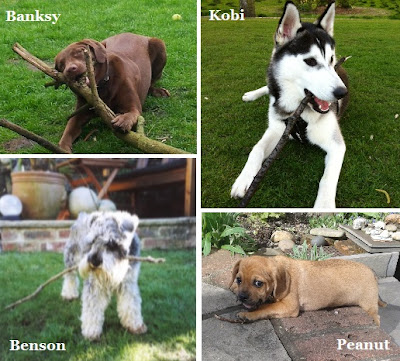 Stick! Competition
If you have a dog (or any pet for that matter) that just can't resist a stick, then send us a photo and our favourite one will win a copy of Stick! by Andy Pritchett. Either email us at marketing@walker.co.uk or Tweet us the picture @WalkerBooksUK by Friday 3 May. 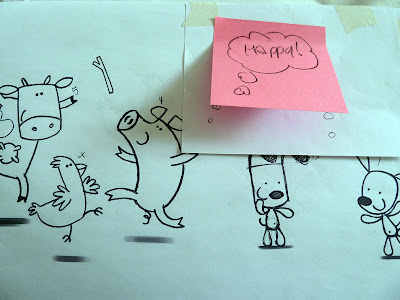 Be one of the first to get a copy of Stick! and find it at your local bookshop.
Posted by Picture Book Party at 11:59 2 comments: