The Boy Who Loved Everyone - Behind the Scenes 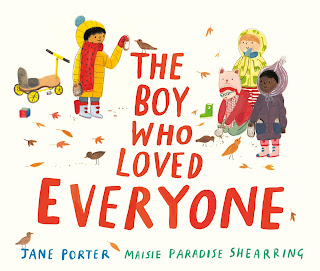 The Boy Who Loved Everyone is a touching tale inspired by real life. We spoke to author Jane Porter and illustrator Maisie Paradise Shearring about the story behind the book.

Jane: One of the highlights of my week is the art class I run at a local nursery – the children are so funny and sweet, and always give me lots of ideas. I always note down the things they say in my diary (which is in comic form) – here’s what happened at storytime last week – as you can see, they throw themselves wholeheartedly into identifying with characters in stories. 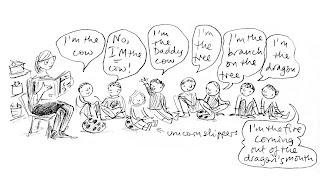 About three years ago one little Greek boy in particular made my heart swell each week when he told everyone that he loved them – the other children, the teachers, and me. It was so guileless and utterly charming – but I noticed that everyone reacted in different ways to his words.

That’s how the story began – but it was the classic 1940s film It’s a Wonderful Life which inspired its shape. I imagined how the boy would feel after a day of pouring out his love to limited response, then gave his mother the role of showing him the next day what a difference he had made in the world. I sent it to the editorial team at Walker, and was thrilled when they said they liked it, particularly because I hoped that this one boy’s love could spread out wider in the world through a book.

When Maisie agreed to create the artwork I was even happier - I had been admiring her work from afar for a while and knew she would bring the right sense of tenderness to the project. 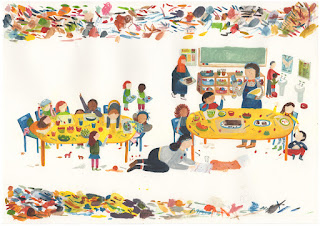 Maisie: I often draw from life to inspire my projects and help me understand the world a book might be set in. So, when I read this beautiful story by Jane, I was keen to try to arrange to go and draw in a nursery. I was very excited when I found out Jane worked in a nursery and that this story was inspired by an experience she had there.

I was fortunate to be able to go along with Jane for two days at the nursery. Surprised by how fast the children moved, I focused on just trying to capture the different ways they stand, sit and interact. I also absorbed as much information as possible about the surroundings; the displays, toys, and furniture, and afterwards made lists and sketches. I learnt so much! 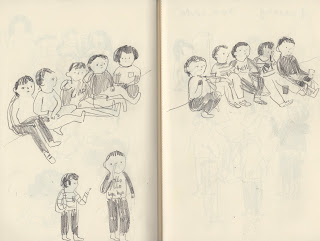 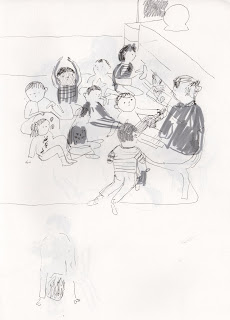 Jane: I couldn’t have been more pleased when I saw the finished artwork – it was everything I hoped it would be and more. I’ve now had the chance to show the finished book to the children at the nursery – and they were so excited to recognise all the wonderfully observed familiar details that Maisie slipped into the book – the ladybird cushions, and the washing line of paintings. And immediately they recognised the teacher, who comes straight from real life! 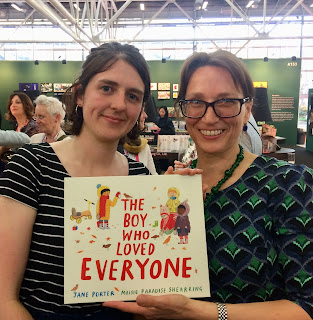 The Boy Who Loved Everyone is available to buy where all good books are sold!
Posted by Picture Book Party at 10:35