To celebrate the publication of Grow by Nicola Davies, illustrated by Emily Sutton, the lovely Nicola wrote a special piece all about DNA. Enjoy! 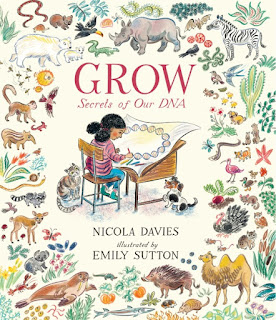 A Letter by Nicola Davies

I was truly rubbish at genetics at university. Although I was doing a zoology degree I was almost innumerate so the maths involved in genetics just made my little brain hurt. But what I adored was the idea that a single cell could unfold, unfurl, unpack into a whole organism directed and coordinated by a strand of chemical beads.

It may seem completely mad to try and open up a subject as complex as genetics for very young children - but the manifestations of genetics are so much a part of their lives. For a start they grow, and they may see siblings grow from a blurry ultrasound picture into a beloved brother or sister. How many times as children are we told we are like, or not like some member of our family? I can remember vividly the absolute fascination of the identical twins in my school - they seemed like something totally magical. Everyday genetics doesn’t stop there. Long before we had the technology for GM we were selectively breeding plants and animals, manipulating the genetic instructions for building bodies to provide us with food, help and companionship. 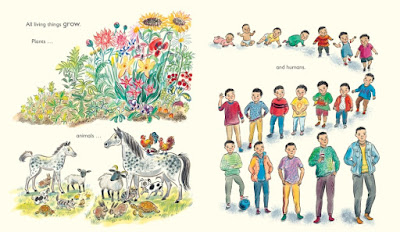 Genes shape not only the ‘what’ of our bodies but the ‘how’ and ‘when’ too. One of the things I adore about zoology is the different ways in which species are adapted to their environment and that includes the choreography of development governed by genes. For example, a human new-born, is all head, but the legs are relatively tiny. That’s because human babies can rely on being carried about after birth so it makes sense for their heads to grow and their legs can catch up later. A new-born zebra however is obviously very ‘leggy’ because from birth the most important thing for a zebra to do, is run.


Genes don’t stop working at birth or when you reach maturity, they are at work all the time, governing the maintenance, running, and repair of every bit of you. Their ability to create a whole variety of immune cells which can keep ahead of the ever changing onslaughts from bacteria and viruses has been the driving force behind sex almost from the start of life: we simply can’t generate enough variety to fight infection on our own, so we need to mix our DNA with someone else’s. 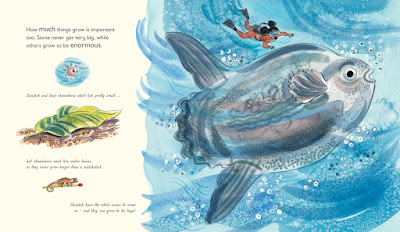 TV crime dramas encourage us to think of each person’s DNA being absolutely unique to them. It’s true that some of your DNA is not like anyone else’s, but quite a bit of it is just like the DNA in a fish or even a pot plant. That’s because some of the basic features of your body, such as how your cells produce energy, are the same in most living things. These basic features evolved a really long time ago and the instructions for how to do them haven’t really changed, and have been passed down the millions of generations of living things. The DNA coding for more recently evolved features, such as your hands or the way your brain is put together, is unique to you although very similar to that of other human beings.

It would probably help us at the moment to remember that large parts of our DNA are derived from viruses, which have incorporated themselves into our long list of ‘instructions’. Some are there for their own ends, and some have been tamed by our genes to work in the service of our cells. Although the human genome project sequenced the whole of human DNA, that was really just the start. There are so many things we don’t yet understand such as, why are there so many repeats in our genome, identical sequences of code appearing again and again and making up to two thirds of the total. There are lots of theories about the reasons for this, but the one I like best is that these duplicates provide a folding map, so that the two meter long strand of our DNA can be neatly packed inside the nucleus of almost every cell in our bodies, a space far too small to see without a microscope. 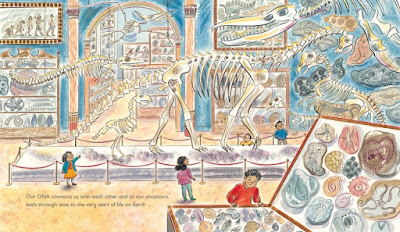 DNA has many stories to tell us, about the long history of life on earth, and when and how the enormous variety of different living things alive today, and in the past, evolved. It can even tell us something about the history of our own species or even our own human families. But perhaps the most important message carried in our DNA is that all human life indeed all life is related, and that all our stories, whatever race, whatever nation or species to which we belong are written in the same language.

Grow is available where all good books are sold!
Posted by Picture Book Party at 13:07