Polly Dunbar gives us an exclusive insight into how she got the idea for her beautifully surreal new picture book, Arthur's Dreamboat. 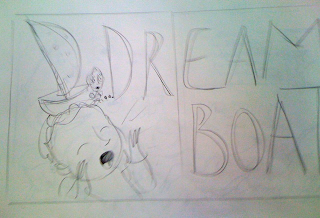 Tucked away in one of my old sketchbooks is a drawing of a little boy standing on Brighton beach looking out to sea. I noticed that the boat on the horizon was perfectly positioned to look like a hat on the little boy’s head. Idly, I doodled it down. Only I can see the boat hat, I thought,  it’s invisible to everyone else.

Ah!  It must be a magic boat, a DREAM BOAT! Thus the idea for Arthur’s story floated into my head. 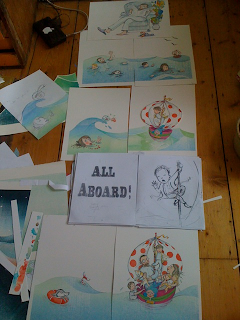 I wrote a rough version, made a little dummy, thought it was a bit strange and then forgot about it. The good thing about leaving a story to ‘rest’ for a little while (or a long while) is that when you re-read, you can see it with fresh eyes. I dug this one out ten years later, brushed off the dust, thought - yes, this is a bit strange, but there’s something there. I could see how to make it work.

So I made some more dummies  -  cutting back the text in each one - until eventually the pictures carried  along most of the story of Arthur’s Dream. Happily, I moved back to Brighton seafront at the same time that I was due to start illustrating 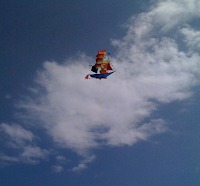 On the day I moved in I saw this kite in the sky. I’m always looking out for signs or clues and this was a good omen; it gave me the idea to have the Dream Boat flying off into the sunset, not just sailing.

I spent a lot of time looking at the sea and sky from my window and wondering how I could capture the iridescent dazzle of the changing elements.

I wanted to go out with a piece of paper and take a print of the real view.  The next best thing was to experiment with  print -making, so I signed up for a course. After a few trials I ended up with a  combination of lino cut and mono printing. I wanted the sense of the water actually flowing into the book to give a real contrast to otherwise minimal backgrounds. I sprinkled maritime dream-like clues throughout the early pages;  the ‘fish net curtains’ are made by spraying through a tangerine bag. 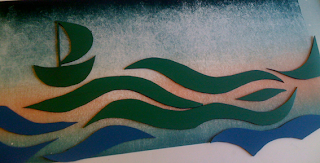 The story hopefully conveys the power of imagination, Arthur is being ignored by his family, who are caught up in everyday life, plugged in or plugged out in some way. Arthur becomes so frustrated by his failure to get their attention that  he eventually shouts DREAM BOAT at the top of his voice. This is the turning point of the story,  the moment he utters a magic word or spell that changes everything. 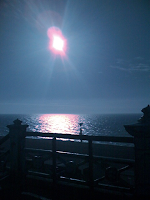 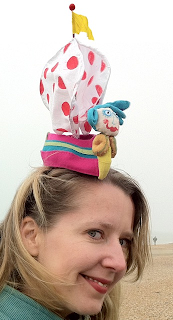 Arthur’s dream finally seeps into the book. His family find themselves  up to their necks in his sea - a good time to believe in a dream boat. When they try to scramble aboard, Arthur isn’t so sure: should he let them on, or not?

Of course he does.  Arthur’s family are reunited aboard the ever growing dream boat and they sail away together.  The children I have read it to so far see nothing strange about it: some dreams are true if you think about them really hard, they say. Even better, write them down or draw picture.

Posted by Picture Book Party at 10:20