It’s Father’s Day and an occasion to rejoice wonderful daddies and papas everywhere. Sean Taylor and Emily Hughes’ perfectly pitched picture book story of a father and child sharing an adventure is the ideal read to share with your child.  A Brave Bear is about the beginning of a child becoming independent and fending for themselves and it’s about a father taking a gentle step backwards (but close enough to step in if needs be) to afford his child the freedom and space to do that. 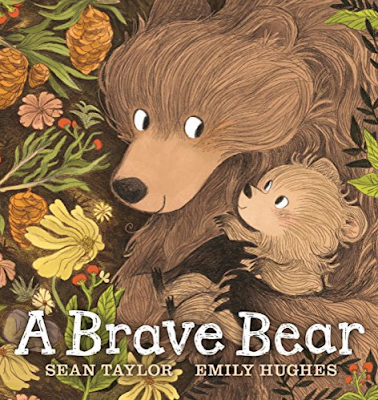 To celebrate Father’s Day, we asked the Walker Books picture book team to share their memories of their dads and to tell us what they learnt from their dads and what he means to them.
(Prepare those hankies!)

Any interest I have ever had has been respected and nurtured by my dad. When I helped fix our home printer (by pulling on a jammed piece of paper), he presented me with a word-processed certificate that named me a “level 1 computer engineer”. When I got really into the Ancient Egyptians at school, he subscribed me to Ancient Egypt magazine and got me a hieroglyphic stamp set so I could write secret messages. And when hedgehogs became my favourite animal, he would look out for them in the garden when it turned dark, and bring me out to look at them with a torch. 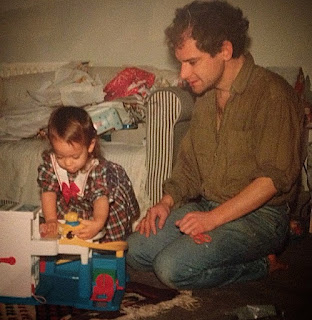 You could say that my dad taught me about technology, about history, and about nature… But what he really did was teach me that I could pursue anything I liked – that was alright by him – and that learning should be taken very seriously.  Who knows? Without my Dad I might never have been sure enough of myself to turn a love of books into what I am so lucky to be doing now – helping to make them. Happy Father’s Day, Papa! 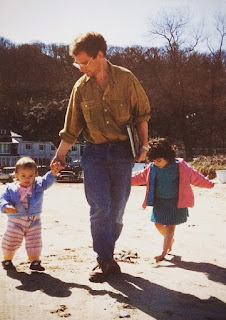 When we were teenagers and absolutely loathed getting out of bed in the morning, my dad would stealthily open each of our bedroom doors wide … and he would open the kitchen door wide … and then, he would get the Bothy Band playing on his stereo and whack that volume up FULL BLAST, as loud as it could possible go. Suddenly, the house would be full of wild, soaring Irish music. We would moan and groan and shout abuse up the hallway, but you honestly couldn’t help but laugh.

I think that story is a good summation of my dad – he’s always throwing doors open wide and filling spaces with music and laughter. 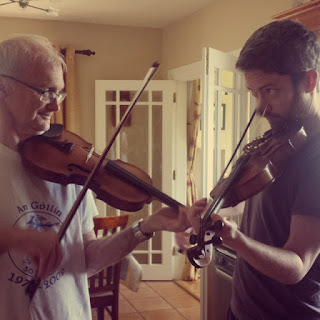 When I think of my dad now, I think of him smiling. Or baking (his new favourite venture – he’s a sourdough ‘whisperer’), with a tea towel slung over his shoulder. Or humming. Or thoughtfully plucking a tune on his fiddle that rests on his knee, as he’s listening to me tell him something. Or turning up his music in the car and saying, “Ah guys, listen to this. Isn’t that some magical playing.” He is goodness personified and his goodness shines through in everything he does. He loves people, people love him. He loves hearing everyone’s stories and telling his own; he loves learning (languages, new recipes, dances – he even learnt ballroom dancing!) and he has insatiable appetite for knowledge (he reads constantly and gobbles up news). 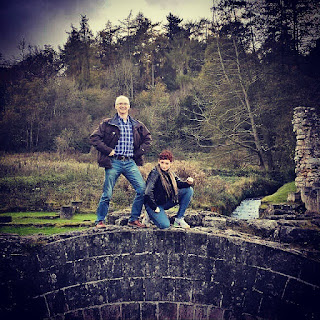 These are the things I take with me as I go through my own days. I take his smile. I take his love of story – telling stories, crafting stories, creating stories with authors. I take the music – all the tunes my dad plays and the ones that we listened to in the car on those long drives across France during hot summers long ago means that I’ve got an ear for the musicality of picture book language – its cadence, pattern, lyricism. I take his enthusiasm – for life, for books, for people. But most of all, I take my dad’s HUGE heart and that’s what I look for in the books I make … a big, thumping core.
My dad, Paddy, P Diddy, does everything with joy and love and he makes the future seem entirely promising. And isn’t that what parents are for? To make you feel like you could do anything, that you could be anyone? I think so. Happy Father’s Day, Dad. You’re the business. 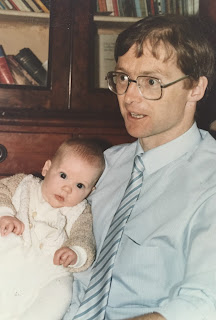 P.S. If you ever need a solid wake up tune, I recommend the Bothy’s Band ‘The Kesh Jig’ – you’ll be lepping out of your bed like the Lord of the Dance himself.

My dad grew up on the Norfolk broads on a farm. When he was a very young boy he’d go out on his own to shoot and fish and collect bird’s eggs (that’s probably illegal today). Uncle Will often took Dad into the fields to help cut the hedges, too – now Dad has a long scar down one side of his face from an accident with the enormous scythe. It’s slightly intimidating, but intriguing as well. Dad’s love for being outdoors is something he has wholeheartedly passed down to me. On many occasions he has urged me to go in the garden with him, “I’ve got something to show you.” We’ll stand outside in silence for ages before he says, “Look, can you see the tiny buds on the trees poking through? Spring is here.” Spotting those small hopeful signs of new life reminds me of Dad and, for me, it’s one of the happiest ways to spend time. 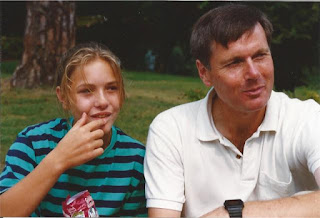 For the first few years of my life, we had a huge black Labrador called Basil. He was a real character, a difficult dog – boisterous and a bit aggressive to strangers. When I was very little, someone had said something hurtful to me, I suppose, and my dad told me a story about Basil. He explained that when Basil was a puppy, clumsily and innocently sniffing about on a walk, a big Alsatian had attacked him out of nowhere. It had really frightened Basil. So Basil became wary and quick to snap, too. Dad said it wasn’t really Basil’s fault; he’d had a nasty experience when he was young and it had made him that way. Dad always has a brilliant way of making me see things and try and understand things from someone else’s perspective. In fact, when we go fly fishing together, he always reminds me to “think like a fish”. I’m never successful at catching one – nor is he actually! – but it’s given me an amusing challenge to focus on at least. 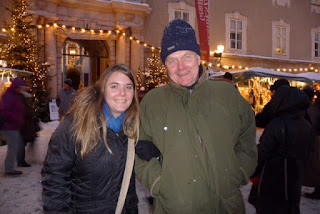 From as early as I can remember, Dad has always sat at the head of the table. My chair to the right of him, my brother opposite me and my mum next to me. Every morning, after finishing breakfast, Dad used to do this special thing. He’d hover his hands above the table and start making a low quiet rumbling noise, “Ooooh ... oooooh...” and slowly but surely the table would start to rise. I’d almost fall off my chair backwards trying to work it out, laughing, saying, “Do it again! Do it again!” and so it would go on until finally he’d lower the table with his fingers flickering above and get up quietly and say goodbye and leave for work. Every day Dad left me believing in magic. I still do, thanks to him. 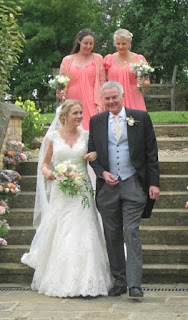 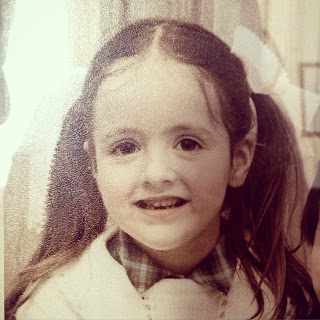 When I was very small, maybe about three years of age, I remember sitting in the front of a white car on red leather seats between my grandparents, looking out over its high dashboard. No seat belts of course, it was the 70’s after all, and my tall, bald Grandad was driving very, very fast over a long stretch of ripply, hard packed sand. The grey sky seemed really huge over the horizon and there, in the far distance, was an ice cream van all on its own. There were no other people on the beach at all and as we came closer and closer to the van, I recognised a very familiar head leaning out over the counter – my Daddy!

There he was, with his big glasses and his big head of curly black hair, laughing and laughing as we drove up to the hatch. He asked me what I would like and I told him that I wanted a '99 with red sauce. So he gave me the biggest, most massive, whipped ice cream cone I'd ever seen, with TWO chocolate flakes and swirls and swirls of sweet raspberry sauce all round. I could barely hold the ice cream in my little hands. It felt so strange and surprising to this three year old on a grey summer's day in Dublin, in the 1970’s – to see my Dad in such an unfamiliar setting.

We left then, me still in the middle between Granny and Grandad, with sticky hands and a collapsing ice cream cone. I remember looking over my shoulder at my Daddy's head getting smaller and smaller in the distance the further and further away we got. I thought that he would be lonely all on his own in his silvery, shiny ice cream van on Dollymount strand and I remember feeling a bit lost myself, leaving him behind, I was sad – despite my enormous ice cream.

I still call him Daddy. My own funny, goofy Donegal Daddy, full of surprises and jokes and craic. “Oh, your father is some fellow alright,” I hear people say. And he is – one of a kind – a law unto himself. He's still always behind me, supporting me in everything I ever wanted to do and he is part of me in ways I'll never understand. He's made me the person I am today and he’d give me, and my brothers and sister anything we ever needed. That's my Dad, and I love him. Happy Father’s Day, Daddy. 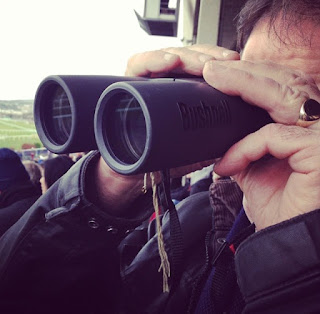 Posted by Picture Book Party at 16:58