Here at Walker HQ, we’re using International Women’s Day as the perfect opportunity to talk about the female characters that have inspired us. Some of them were created by our own beloved authors and illustrators, and some of them are from further afield, but all of them are examples of fantastic females that have helped us become the people we are today. 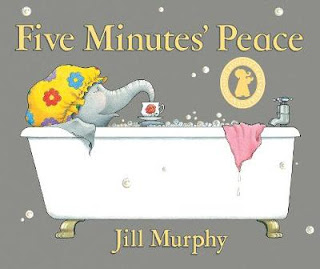 Mrs Large, brainchild of the wonderful Jill Murphy, is a role model for elephants girls children people everywhere.
She knows what she wants, has amazing confidence and is a champion of body positivity. As a shy child who was terrified of most people, places and things, reading about a beautiful, bold elephant running her family (and in the unpublished spin-off that I wrote in my head, the world) put a little bit more beat in my step. It got me to put my hand up when I knew the answer, and prompted me to think about what I actually wanted to do, not just what was expected.

When I interviewed at Walker years later, I walked into the meeting room and 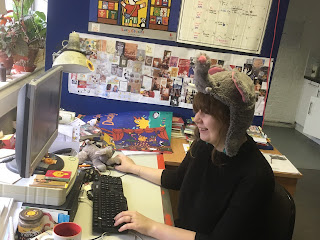 saw a copy of “Five Minutes’ Peace” on the shelf (for those unacquainted, it’s the tale of Mrs Large’s epic struggle to just have a bath and chill out). Somehow, I managed not to faint on the spot and I got the job. Now, every morning I think about how lucky I am to work with one of my feminist heroes (category: cartoon animals from books. If I had to talk about all the women who have inspired me, this website would crash…). 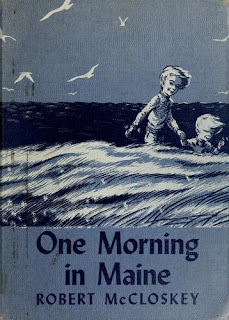 In “One Morning in Maine” by Robert McCloskey, Sal wakes up and discovers she has a loose tooth. “When your tooth does come out, you put it under your pillow and make a wish,” her mother tells her, so Sal thinks of a special, secret wish (hint: she wishes for a chocolate ice-cream). But Sal’s tooth is lost in the mud while she’s helping her father gather clams for lunch. Sal is distraught. What if a clam finds her tooth and gets her wish?

“If we come back here tomorrow and find a clam eating a chocolate ice-cream cone, why, we’ll have to take it away from him and make him give my tooth back too,” she said.


On her way to Buck’s Harbour, Sal finds a seagull 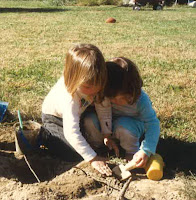 feather and decides to make her secret wish on the feather instead. She helps her little sister Jane into the boat, and her father rows them to the harbor … where Sal gets her chocolate ice-cream after all!

Sal is a bright, independent protagonist and a great role model for girls AND boys. She is imaginative and resourceful, and capable of finding her own solutions. She is patient and kind to her little sister. Plus she loves spending time with her family, playing outside, befriending local wildlife and wading barefoot through the mud – a girl after my own heart! 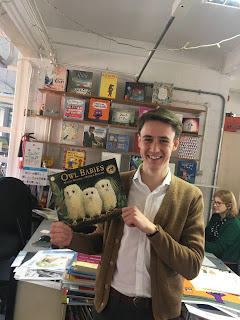 Perry Emerson, Publishing Co-ordinator
As the eldest of three brothers, I have always felt a great affinity with Sarah, the eldest of Martin Waddell and Patrick Benson’s “Owl Babies”.
Considered, stoic, logical – these are the characteristics Sarah embodies. She also carries the responsibility felt by eldest children everywhere. Compared with the exaggerated flap that middle brother Percy gets himself into, and the adorable (but essentially useless) contributions from Bill, the youngest, Sarah’s words are a reassuring and measured response to the mystery of their missing Mummy. “She’ll be back”, she says, “I think she’s gone hunting … to bring us back mice and all things nice”. And although the illustrations betray the trepidation she herself shares with her little brothers, these are the words of a big sister whose concern for her siblings’ comfort is greater than her concern for her own. I see Sarah as the true hero of Owl Babies; an owlet wise beyond her years with the courage to comfort despite her fears.
Since my first brother arrived when I was two, I have earnestly taken to the example of elder sibling responsibility given by Sarah, although often with absurdly comic rather than admirably courageous results. I was once discovered by my parents amongst a pile of clean clothes, strewn from a laundry basket upended by my brother, quite sincerely admonishing him for his actions. “STOP, that’s against the RULES,” four-year-old me scolded my not-yet-two-year-old giggling brother. I like to think that Sarah, too, would be found in a feathered fury over little Bill upsetting their nest. In truth, though, even twenty years after the fact, I feel I still have a lot to learn from Sarah as an exemplary and aspirational older sister. 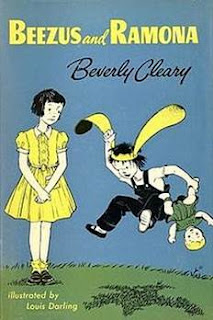 Beezus, the big sister, is quiet and sensible. She follows the rules. She gets competitive playing board games with Henry Huggins next door and is over the moon when her Aunt Beatrice buys her a beautiful sewing kit for her birthday.

Then there’s Ramona, just four years old. She’s mischievous, she’s impulsive. She powders her face with fluffy white marshmallows and wears bunny ears to the library. When she discovers a box of apples in the basement, she eats a single bite out of every last one – because (she explains) the first CRUNCH tastes best. 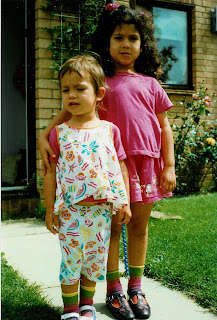 For me, Ramona and Beezus, together, are magic. Because neither girl – the more mischievous, the more reserved – is ever portrayed as a better example of a girl. And, of course, there is and never should be an example. You can ride your bike around furiously (Ramona-style) AND learn how to cross-stitch (channelling your inner Beezus). When you’re upset, you can SHOUT or be quietly exasperated. And if there are qualities a girl should have … well, they’re qualities that ALL humans should strive to have: The ability to be kind, accepting and empathetic … and not too hard on yourself.

Beverly Cleary gets it. I mean, she got it in 1955! These sisters, with their embarrassment, guilt, joy, confusion and imagination, feel real and they feel free … and they are very, very funny. (Here’s me and my sister clearly up to no good … I’m the smaller one). 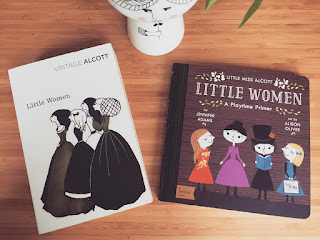 I adore “Little Women” by Louisa May Alcott. I was introduced to this tale of a struggling, impoverished family of women growing up in New England during the Civil War when I was eleven years old. Experiencing the four March sisters – Meg, Jo, Beth and Amy – and the stoic Marmee for the very first time, I thought (and I still think) THIS is how life should be: EPIC, with great sweeping adventures, abounding with lessons of love and loss; learning about yourself; knowing what is important and who is.

I am inspired by the character of Jo March in lots of ways – I love her passion, her determination, her absolute resolve of character. She never wavers in the face of adversity and, instead, digs deeper within herself for courage and strength – cutting off all her hair and selling it so that her mother will have enough money to get a train ticket to visit their father, who has been injured in war; seeing her fragile sister Beth through the final days of her short life. She even turns down a marriage proposal from Laurie, her best friend, saying to him: “You know it’s impossible for people to make themselves love other people if they don’t.”

Jo is so wholly sure of who she is and what she wants. And she is never surer of that when nestled in between her sisters, drawing strength and inspiration from their chat and play. There is such strength in sisterhood and I carry that idea with me always. 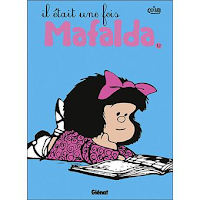 Mafalda was probably my favourite female character when I was a child growing up in the early seventies. She is the star of the Argentine comic strip from cartoonist Quinto. Mafalda is incredibly smart and funny. She is particularly concerned about very serious matters and has strong opinions about the world we live in, the people, the political, ethical or environmental issues, and would debate these with her friends and family. The charm obviously comes from the contrast between her childish looks and her intelligence, and the way she tackles bossy adults is very clever and satisfying for a young audience! 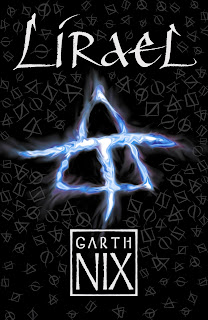 Anna Robinette, Artworker/Typesetter
Lirael, from Garth Nix’s Old Kingdom series, is an outsider in her all-female community of clairvoyants for one reason: she cannot See into the future. Noticing her despair, two leaders in her mountain community suggest she finds work to help with her isolation.
She asks to work in the Great Library of the Clayr, a place “that can be dangerous to a girl of fourteen. Or a woman of forty, for that matter” and is home to “very special or dangerous items that had to be fetched in person, or even by large parties of armed librarians.” The Library is shaped like a nautilus shell, spiralling into the depths of the mountain and contains not just endless books but scrolls and maps of magic, armouries, odd paraphernalia, costume rooms and greenhouses underground. As time goes by she makes friends, learns magic and discovers her true purpose…
For me, as a quiet, bookish girl, the idea of a library so full of the unknowns, of danger and of adventure immediately appealed to me (#dreamlibrary). And like most teenagers, I could relate to feeling like an outsider. Every so often I go back to the book to reabsorb the magic and to remember that we are as only as isolated as we make ourselves; inner strength and courage go a long way; and finding our passions to keep busy and to get out of/into trouble is one of life’s great pleasures.

Konrad Kirkham, Deputy Production Manager
My absolute favourite book in the world is “To Kill a Mockingbird” by Harper Lee. Scout Finch is a strong-willed, independent and feisty girl, whose ever-curiosity and occasional recklessness makes her a force to be reckoned with! She stands up to the patriarchy whenever she can (albeit sometimes due to ignorance), and defies bigotry and hatred in an age of extreme bias. You rock, Scout!

So, there you have it, some of our (many) favourite female book characters. Let us know yours below! And don’t forget to check out some of Walker’s best female-led picture books this International Women’s Day!

Find all of these book at your local bookshop.
Posted by Picture Book Party at 12:48