It's an absolute treat to invite Alastair Chisholm onto the Picture Book Party blog to tell us all about the making of his new book, Inch and Grub: A Story About Cavemen. You can now read the full post below! 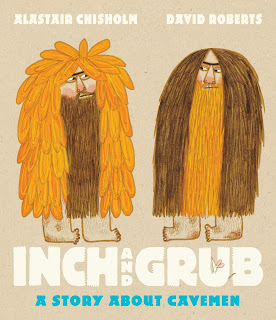 The Cavemen are Here!

Inch and Grub is a tale of two rather silly cavemen who get into a rather silly contest to collect the most STUFF, with rather silly results. It’s been a long journey for them and me, but now they’ve arrived and I’m incredibly excited to see them!

Inch and Grub have had a very long journey. It’s been almost ten years since the day I was sitting at my desk, doodling over ideas, and making a funny little drawing of two cavemen who kept bickering at each other. 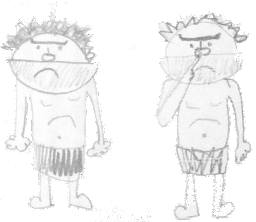 My first doodle of Inch and Grub

It wasn’t long after the last major banking collapse, and the whole world was talking about how all of these companies had been built up almost on thin air, and how it had now come crashing down. I looked at my two little cavemen and I imagined them sniping at each other, and boasting about how one had a bigger cave than the other, or a house, or… or a horse, or a carriage, a train, a fancy car!

…And they just seemed so ridiculous that I knew I had to do something with them.

I knew right away how they would talk – “Me have cave! Me am best! That no fair!” And it was huge fun thinking of all the things they could accumulate. I knew early on that they would get modern stuff, from caves to houses, to castles, to skyscrapers, and from water to fire to television to telephones to spaceships… At first, I wasn’t sure if they would change in looks as well – would they become more modern? I imagined what King Inch would look like, or – my favourite – Disco Grub… 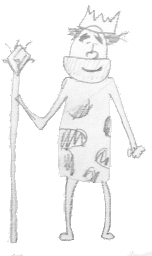 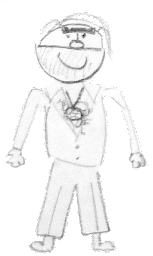 And at first, they were actually much meaner. They threw stones and built fortresses. They cut down all the trees, stole each other’s things, ruined the landscape and, in the end, blamed each other without ever thinking about their own behaviour.

But gradually, with the help of some fantastic editing first from Emily Lamm (then at Gullane) and then Lizzie Sitton at Walker Books, my two horrible cavemen softened a little. They became a bit sillier, and a bit less cruel – and at the end, they do, perhaps, learn their lesson…

(Also, my wife Catherine must get this credit: When Emily suggested the cavemen needed one more thing on their piles, one final “straw to break the camel’s back”, and I was stumped for ideas, it was Catherine who said: what about a silver drinking straw?, because she is a genius)

From there, it was down to finding the right illustrator for the story, and here I was very lucky indeed to discover that David Roberts – whose work I love – was interested! David is very much in demand these days, so we had to wait just a bit longer for him – but it was absolutely worth it.

And so, I’m very pleased to present to you, the final version of INCH and GRUB: 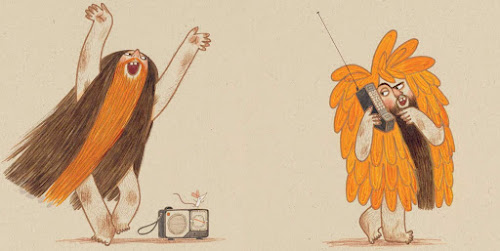 Me am very happy.

A special thanks to our guest author this week, Alastair Chisholm!
Inch and Grub: A Story About Cavemen is now available to buy from all good booksellers.
Posted by Picture Book Party at 15:14