Behind the scenes with Nicola Davies, author of A First Book of Animals 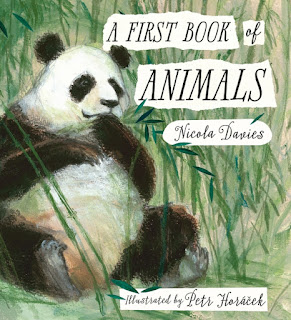 This month we have been learning a lot about animals, thanks to A First Book of Animals, the brand new treasury of poems by Nicola Davies, featuring over 50 different animals beautifully illustrated by Petr Horáček. We went behind the scenes with author and zoologist Nicola Davies to find out about her inspiration for writing the book…

Writing A First book of Animals was a holiday from the other sorts of writing I do. No plots to worry about, no characters to invent, no story line required to lace all the facts together. All I had to do was create a series of vivid snapshots in words of animals that I love. Complete work BLISS!

I wanted each poem to be a fresh and clear as possible - so that readers would be captivated by creatures they’d never heard of before and see familiar animals in a new way. That meant getting my brain to work as flexibly and as playfully as possible. So, as well as reminding myself of the facts about each animal, I did a LOT of staring into space and letting ideas romp around inside my head. 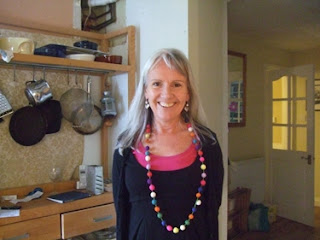 I decided that I wanted everything about the writing of this book to be enjoyable, so I didn't worry about making choices about which animals to include. I chose my favourites, and animals that I remembered getting excited about when I was little. Remembering how I learned about animals as a young child helped give me a way of dividing the book into sections. Size, shape and colour are the first things we all use to learn to recognise different creatures, so that’s where the book begins. When I was six I was extremely proud that I knew the correct words for animal homes - a badger’s ‘sett’, a squirrel’s ‘drey’, an otter’s ‘holt’. So ‘HOMES’ had to be another section. (I was particularly fascinated by beavers and their dams and when I finally got to see them in my thirties I was delighted). Thinking about how I loved it that a cheetah could run as fast as my dad’s shiny new zodiac car, that Arctic terns could fly to the South pole and back and that somewhere in the world insects lit up the night like fairy lights, gave me the last section of the book.

As a child, I was lit up by the blackbirds and frogs and hedgehogs in our back garden; animals far away, that I read about or saw on the TV, gleamed and glittered in my imagination. The wonderful thing about Petr’s illustrations is that they all glow with that heart-shine - they aren't simply beautiful images, they are full of emotion and reflect what animals look like inside me, where they are the stars of my heart.

I hope our book passes on a love of nature to a new generation and helps them to experience the joy of holding close the beauty and wonder of living things.

Something about a few of the poems

I’ve seen blue whales in the wild and been close to them in a boat half their length. When they breathe, its amazing; the sound carries a long way, especially on a still, calm day. It sounds almost like steam escaping from a vast metal pressure cooker - you can hear the great interior space from which the air has come. Sometimes, the sound of the blow is the first indication you have that there is a whale out there. You hear the sound, turn to look and there is that long long smooth back slicing through the water.

I was once in Nakuru National park in Kenya in a very small car cos I couldn't afford a landcover. A giraffe came and drank from a puddle beside my car. It splayed its legs to reach down and get to the water and as at straightened up, it stopped and peered in through the car window. I got a fabulous close up view of those lovely eyes, and long eyelashes and the most disdainful expression in the whole of Africa!

I was fascinated by beavers as a little kid. I finally got to see their dams when I went to Alaska, about 25 years ago. The first thing that you think when you see a beaver dam is that it looks as if it was human made. The structure is so clever, so well thought out, that it isn't something you imagine an animal making. The thing that struck me most was a line of sticks, pushed into the mud vertically to strengthen one edge of the dam; they were placed at such regular intervals they looked as if they had been measured with a ruler. 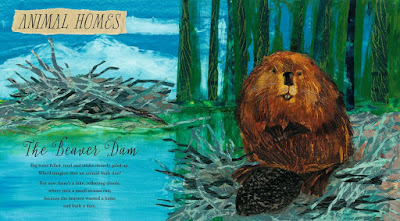 I was in Borneo a couple of years ago and was lucky enough to see wild Orangs along the Kinabatangan river. Last one afternoon we watched an old male make his bed for the night in a tree close to the water’s edge. He was incredibly strong and bent branches thicker than my arm as if they were stakes of grass. The construction looked so lazy, so laid back that you didn't notice until it was lamest done, how cleverly he had used the shape of the tree and the leaves and branches around him. He finished his nest with a canopy of leaves even though it was a perfectly beautiful afternoon. Back in my hotel a few miles away, I woke at two to the sound of rain pelting on the roof. It was nice to go back to sleep knowing that the orang had known the rain was coming and would be as dry in his bed as I was in mine.

There are many sorts of fireflies all over the world. We have glow worms in the UK - not worms but female beetles that glow to call to their mates - they still survive in some pl;aces and are magical. On the same trip to Borneo we went out on the river at night and saw fireflies on a big scale - half a mile of riverside trees were simply covered with them. They flashed on and off more or less together, rather as if the trees were covered with a massive set of fairy lights connected to a couple of dodgy plugs.

The Nightingale and the humpbacked Whale

When I was pregnant with my son, who is now almost 30, we lived in a house where I could hear nightingales from my bedroom window. I would open the window on cold early May nights and listen to the wonderful sound of their song gurgling through the darkness under there stars. In Italy this year I heard nightingales again, singing in the moonlight in the Abruzzi mountains. Bird song and humpback whales song have more in common than you might imagine - speed whale song up and it sounds like bird song. Somehow birds and whales are using the same rules of composition even if their instruments are many octaves apart! It took me 34 years to hear humpbacks singing on their breeding grounds after studying them on the summer feeding grounds in Newfoundland when I was doing my degree. Its a sound I definitely want to hear again, so Im going to try and get to Hawaii or French Polynesia to hear them sing. 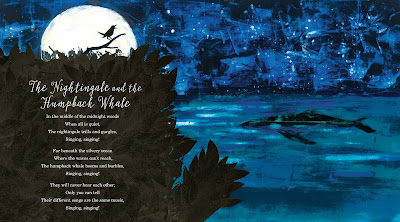 We asked Nicola 5 questions about making the book...

Check out some more artwork from the book, featured in The Guardian gallery.

Next week we'll be going behind the scenes with illustrator Petr Horacek and finding out more about his process of drawing the animals. We'll also have a competition to win signed copies of the book!

A First Book of Animals is the second title in Nicola Davies' First Book series, following the bestselling A First Book of Nature. Pick up a copy in your local bookshop.
Posted by Picture Book Party at 11:45